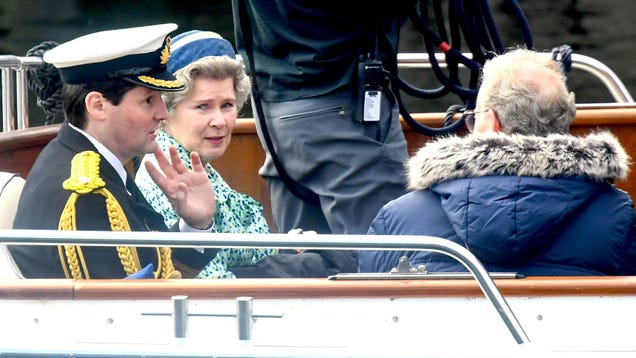 The death of Queen Elizabeth II on Sept. 8 has triggered changes in the royal family, most notably, Prince Charles is now King Charles III. But her passing has also resulted in modifications in the production of The Crown, the Emmy award-winning series from Netflix.

“As a mark of respect, filming on The Crown was suspended on Thursday,” a Netflix spokesperson told Quartz. “Filming will also be suspended on the day of Her Majesty The Queen’s funeral.”

The change in production won’t impact the release of season five of the series, which is scheduled for November. Still, the modified shooting schedule is a nod the sensitivities and protocol around the Queen’s death and how closely the series is tied to the real life royal family in the minds of many viewers.

The Crown will need to tread even more carefully now that the real Queen has passed
An example of just how seriously The Crown takes its role as the fictionalized chronicle of the royal family’s story was displayed when Netflix introduced the actor selected to play the Queen in her later years.

In 2021, seated behind a desk in way that was reminiscent of Queen Elizabeth II’s seated speeches from Windsor Castle, actor Imelda Staunton confirmed her addition to the cast following months of speculation. The UK actor is well known to international audiences based on her work in the Harry Potter and Downton Abbey franchises. She herself has been honored by the royal family as a “Commander of the Most Excellent Order of the British Empire” or CBE.

This content is not available due to your privacy preferences.
Update your settings here to see it.

For younger viewers who didn’t grow up watching Queen Elizabeth II in the news, Staunton will become the avatar of the famed monarch.

The Crown has always had to navigate all of the delicate handling needed to depict the royal family. Now, the pressure to do so will likely increase several fold as the world looks to the Netflix series as the timely finishing touch on the life of the UK’s longest reigning monarch.