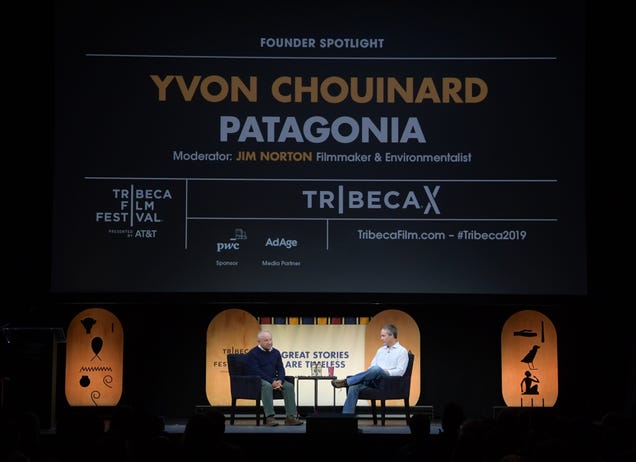 Yvon Chouinard just gave away almost all of the private stock in the family-owned company to a nonprofit that will use the proceeds to fight climate change.

Yvon Chouinard just gave away almost all of the private stock in the family-owned company to a nonprofit that will use the proceeds to fight climate change.

Yvon Chouinard, who started Patagonia in 1973 and turned it into an iconic $3 billion outdoor apparel empire, just gave away almost all of the private stock in the family-owned company to a nonprofit that will use the proceeds to fight climate change. It’s a masterful bit of corporate maneuvering that will allow his family to effectively maintain control of Patagonia, direct billions toward climate advocacy—and almost entirely avoid taxes in the process. Most of Patagonia’s shares—98%—are going to a nonprofit, meaning that Chouinard will not have to pay taxes on that gift. Media spoke to New York University law professor Daniel Hemel about the Chouinards’ decision, what separates it from a recent maneuver by a conservative billionaire, and what initial media coverage got wrong.

Do you see the Patagonia announcement as an act of philanthropy, an act of tax avoidance, or something in the middle?

It’s all of the above. The family is using Patagonia to make the world a better place. They are also doing it in a tax-advantaged way. They’re taking advantage of a feature of the tax law that lots and lots and lots of philanthropists take advantage of. When an exempt organization receives dividends or sells appreciated stock, the exempt organization doesn’t pay taxes. And that’s true for public charities, private foundations, and also 501(c)(4)s.

The Chouinards are not claiming an income tax deduction in the same way that the 10% of Americans who itemize get a tax deduction when they give to charity. A lot of the big-time philanthropy— whether it’s going to a (c)(3) [a typical nonprofit charity] or a (c)(4)—that deduction matters only a bit in the big scheme of things because many philanthropists have already figured out ways to minimize their income tax liability. When Warren Buffett gives Berkshire Hathaway stock to the Gates Foundation, he’s able to deduct a bit of it, but his taxable income is so small relative to the amount he’s giving away that the deduction is almost trivial to him. What really matters is the fact that the Gates Foundation can then sell the stock tax-free. I don’t think what they’re doing is in any way tax evasion—it’s legitimate tax avoidance.

The Chouinard family is paying $17 million in taxes on this gift, right?

It’s almost an irrelevant detail because the amount of gift tax they’ll pay is so small relative to the donation they’re making. They want to stay in control of Patagonia. If they just gave 100% of their Patagonia shares to the (c)(4), then the (c)(4) would have control over Patagonia. Instead, they’ve created a dual-class structure, sort of like Google or The New York Times, where a minority shareholder actually has majority control. And they’re giving a 2% interest that has voting rights to a family trust. Then they’re giving 98% to the (c)(4). The family trust is not tax-exempt, so gifts to a non-exempt trust are subject to gift tax at a 40% rate. So that $17 million in gift tax is gift tax on the 2% of shares. But typically if you make a $3 billion gift [the estimated value of Patagonia], you’d be paying $1.2 billion in gift tax. So they’ve almost entirely eliminated their gift tax.

So if they had given the entire company to the (c)(4), they would have paid $0 in gift tax?

Right. They would’ve paid $0 in gift tax. And my understanding is the reason why they didn’t do that is because then the board of the (c)(4) would control Patagonia rather than the family. In practice, it doesn’t really matter that much because a) $17 million is pocket change to them and b) they’re going to have a lot of sway at the (c)(4). They would probably be able to control Patagonia through this (c)(4) anyway. This is a way of making sure that the family, rather than the nonprofit, remains calling the shots at Patagonia.

On Twitter, you took issue with the New York Times article announcing the Patagonia news and how it was framed. It differentiated between this and a similar gift that billionaire businessman Barre Seid made when he  donated his entire company Tripp Lite to a nonprofit aimed at conservative political advocacy, including opposing climate advocacy efforts. I don’t want to equivocate on the merits of these two donations, but are these two very different people executing essentially the same financial gymnastics?

The only difference with Seid is he had arranged a sale of Tripp Lite, so if he didn’t move fast he would’ve faced a tax liability really soon. Whereas the Chouinards were planning ahead. If they didn’t do this, it’s not like they’d face a $1 billion tax bill next year. [Seid donated 100% of Tripp Lite shares to the nonprofit before selling the firm to an Irish conglomerate, allowing the nonprofit to reap untaxed $1.65 billion takeover fee.]

So, Patagonia’s owners weren’t under the same pressure, but in both situations two corporate owners gave away their companies to 501(c)(4)s in order to avoid taxes and use the money for political causes.

What the Chouinards are doing in terms of climate advocacy—they’re trying to save the planet. So, if I were them, I would like to think I would be as generous and do the same thing. So I do not mean to criticize them. I actually think they’ll probably use the money in a better way than if it went to the federal government and some of it went to fossil fuel subsidies. But one doesn’t want a constructed tax system predicated upon everyone being like the Chouinards.

So, the darkness is the lack of transparency, but the Chouinards are being entirely transparent here.

Do you have a critique of this maneuver or more of how the tax code is set up?

A few critiques: First, there is a critique of The New York Times that has different coverage of two substantively similar gifts. Second, the fact that you can give appreciated stock to a (c)(3) or a (c)(4) and not pay tax on it means that people are going to amass large fortunes, direct those fortunes without them going through the government and basically not pay any tax. That’s Gates, that’s Buffett, that’s Zuckerberg, that’s Seid, and the Chouinards. I think it makes sense for the government to subsidize charitable giving. It doesn’t make sense to subsidize it in this way. And it makes less sense to give that benefit to (c)(4)s that really don’t have to do anything charitable at all.

But given that we have the system we do and climate change is an urgent problem, I wouldn’t want liberals to say, oh, “We’re going to pay as much tax as we can.” I would want them to say, “Well, maybe we’ll try to change the rules, but until we do, we’ll play by those rules.”