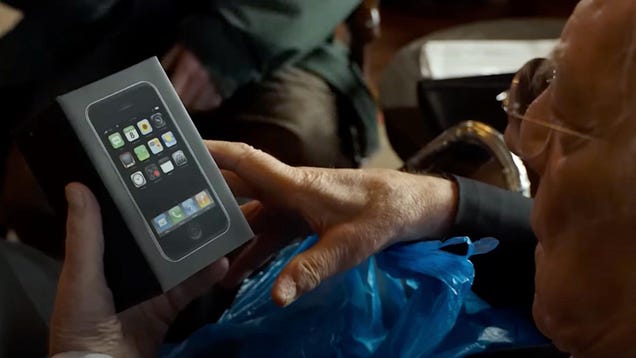 Apple’s new iPhone 14 goes on sale today, but this release is marked by a new twist in the form of Netflix

Apple’s new iPhone 14 goes on sale today, but this release is marked by a new twist in the form of Netflix

Apple’s new iPhone 14 goes on sale today, but this release is marked by a new twist in the form of Netflix marketing that could help boost awareness of the product. The night before the new smartphone release, Netflix dropped the trailer for its new Stephen King film Mr. Harrigan’s Phone, a unique story from the master of horror that is centered around Apple’s flagship mobile device.

Based on a short story released in 2020, King’s tale describes a surly old finance executive Mr. Harrigan who befriends a young man working for him named Craig. (Spoilers ahead.) Craig gave him an iPhone as a gift but after Harrigan (who is played by Donald Sutherland) dies, the iPhone 1, now buried with the wealthy executive, becomes a link from the grave. Soon after, that supernatural link gives Craig the power to send messages to Harrigan, resulting in death for anyone Craig targets.

Aside from King’s usual spooky twists and turns, the story is also a surprisingly detailed history of the iPhone, with Apple’s iPhone 1, iPhone 4, and iPhone 5C all playing important parts in the story.

Netflix did not immediately respond when asked if the timing of the trailer for the iPhone-centered story was deliberate, but its arrival could nevertheless help the tech giant. According to noted Apple analyst Ming-Chi Kuo, demand for new iPhones is lower than usual.

Sometimes marketing magic crops up in the unlikeliest places

Imagine a trailer for a new film focused on a Tesla car arriving just before Elon Musk put a new model on sale, or a movie trailer depicting a character’s obsession with Nike’s Air Jordans coming one day before the sale date of the latest design of the shoe. Such circumstances are rare. And now that Apple TV+ is a direct competitor with Netflix, a promotional collaboration seems unlikely.

Still, even if the marketing is accidental, Netflix’s cinematic ode to Steve Jobs’ mobile technology triumph is passionate and sincere.

“I reached into the right pocket of my khakis and brought out my iPhone 1,” Craig says in the book version of the story. “I held it in my hand for a moment, feeling its weight and remembering how delighted I’d been on that Christmas morning when I unwrapped the box and saw the Apple logo. Had I screamed for joy? I couldn’t remember, but almost certainly.”