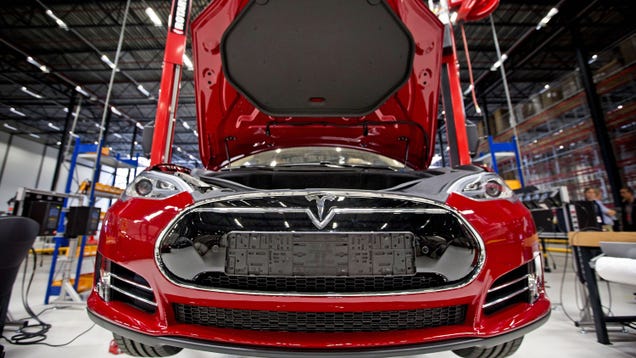 If Tesla employees want to wear pro-union t-shirts while they do their jobs, the company has no right to stop them.

That’s the decision that the US National Labor Relations Board (NLRB) came to this week, overruling a Trump-era ruling that had given employers more leeway in restricting workers from wearing union apparel.

The issue is about a lot more than fashion. “Wearing union insignia, whether a button or a t-shirt, is a critical form of protected communication,” NLRB chair Lauren McFerran said in a statement. “For many decades, employees have used insignia to advocate for their workplace interests—from supporting organizing campaigns, to protesting unfair conditions in the workplace—and the law has always protected them.”

Employers do have the legal right to impose uniform requirements and dress codes, which is why conflict around union insignia pops up fairly frequently in the courts. And so the latest NLRB ruling isn’t just noteworthy for its impact on Tesla, which has tried numerous tactics to shut down ongoing organizing efforts over the years. It also affirms that employers can only interfere with workers’ union apparel under “special circumstances,” such as when the apparel might interfere with the workers’ ability to carry out their job duties.

That ruling could have big implications as companies like Starbucks and Amazon engage in high-profile organizing efforts and union activity steps up at smaller companies, too. Union apparel can play a surprisingly important role in the success or failure of a campaign.

“In union elections, everyone is looking around to see who else is in; to judge whether they believe that their co-workers are capable of coming together to force management to pay more than it wants,” a 2020 report from the Economic Policy Institute, a progressive think tank, explains. “A large collective action—such as everyone wearing union buttons or t-shirts—gives employees confidence that they have the collective power to stand up to management.”

Why Tesla cracked down on union apparel

The Tesla case concerned what happened during a 2017 organizing campaign with the United Auto Workers (UAW) at the company’s manufacturing plant in Fremont, California. In the spring of that year, some workers at the factory began wearing black cotton t-shirts emblazoned with the campaign slogan “Driving a Fair Future at Tesla” as well as the UAW logo.

A few months later, Tesla announced that the union shirts violated the company’s written policy, which required workers to wear either black company-issued shirts featuring the Tesla logo or plain black tees. (The NLRB ruling notes that despite this official policy, before the crackdown on union shirts, “production associates regularly wore shirts that were not black or had logos and emblems unrelated” to Tesla.)

Even though Tesla’s policy doesn’t explicitly ban union insignia, the NLRB found that its wording constitutes an implicit ban, which violates the rights afforded to workers under a 1945 Supreme Court ruling. And while Tesla tried to claim the no-union-tees rule was necessary to avoid damage to cars and to aid supervisors in “visual management” of the factory floor, a judge found that neither claim held up.

Tesla did not respond to a request for comment.

It’s precisely because union apparel is such an effective organizing tactic that some employers try to ban it—or to make workers feel afraid of wearing a union t-shirt or button in the first place.

As one case in point, the 2020 EPI report describes an unsuccessful union drive that took place at tire manufacturer Kumho Tire in Macon, Georgia, in 2017. The drive was met with aggressive opposition from management. In that climate, workers decided against participating in a day in which all supporters would wear union buttons. “If you wear a button,” one employee said, “what’s to say they won’t fire you over it?”

Meanwhile, Kumho supervisors distributed “Vote No” hats to workers, and many temporary, at-will employees—weary of getting on management’s bad side—adopted them. “As temporary employees donned the hats, they flooded the workplace with a sea of apparently anti-union sentiment, and most workers were unable to distinguish between hat-wearers who were temporary employees and those who were permanent employees,” the EPI report says. Even union supporters wound up wearing “Vote No” hats in an effort to avoid retaliation from supervisors.

But when workers are free to display their allegiances, union insignia can help shepherd collective bargaining efforts to victory. Last year, the UC Berkeley Labor Center released a report on best practices for worker contract negotiations. It describes how Marriott hotel workers and journalists at publications like Law360 and Los Angeles Times have all taken advantage of buttons and t-shirts as a way to apply pressure to management during contentious bargaining processes.

“When managers would have a meeting every day—it was like a budget planning meeting that they would have in an open area on the fifth floor—we would have members come out in t-shirts and sit and kind of have a stare-down,” one LA Times journalist said in the Berkeley Labor Center report.

Workers at a Westin Boston Waterfront hotel, meanwhile, chose a particular day to wear buttons to work, and gathered collectively in silence in the hotel lobby. “You could slowly see people building confidence in each other,” a worker said in the report.