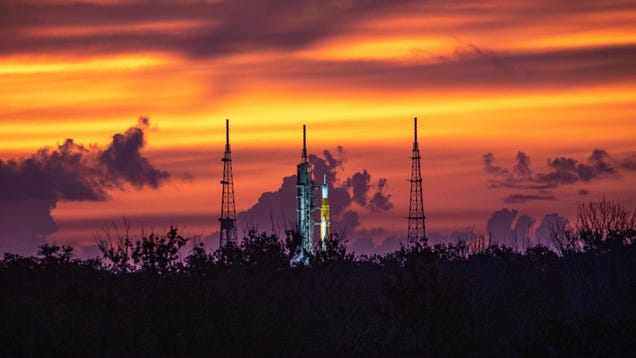 The Artemis 1 mission is an American mega-project

The Artemis 1 mission is an American mega-project

Still, their ultimate purpose wavered: First the vehicles were part of the Constellation program to return to the Moon, then briefly assigned to visit an asteroid under the Obama administration, before becoming the vehicle of choice for Artemis, now the third and strongest attempt at sending people back to Earth’s nearest natural satellite.

During the decade-plus that the rocket has been in development, however, the aerospace industry has changed dramatically. Investments by venture capital-backed entrepreneurs from Silicon Valley have led to cheaper, more effective rockets. SpaceX’s Falcon Heavy, first flown in 2018, has about 60% of the SLS’ payload capacity—for about 4% of the cost. If SpaceX can successfully fly its next vehicle, Starship, to orbit, the SLS may be rendered immediately obsolete.

But it’s worth thinking about what infrastructure like the SLS does in the bigger picture. If Starship does fly, it will be in part because the SLS program gave NASA a freer hand to gamble on its original partnership with SpaceX, which led directly to that company’s success.

The economic implications of the Artemis Moon project

Behind the big rocket, there are hundreds of companies, and not just the contractors and subcontractors who actually built the thing.

A timely paper from economists Alex Whalley and Shawn Kantor used new methodology to measure gains from public spending during the Apollo program. They found a return on investment of greater than 20%, thanks to accelerated innovation in technologies from silicon chips to robotics, and the long-term gains in local areas where NASA set up research and manufacturing centers. While the Artemis program is unlikely to have an impact as large, in part because of its reliance on proven technology, its benefits will be more diffuse than just the gains from exploration.

Moreover, the investment in SLS has given momentum to private activity. The expense and challenge of deep space exploration has created openings for private companies to take on the comparatively safer environment in low-earth orbit. Hundreds of millions of dollars have been raised to build and service private space stations as the International Space Station approaches retirement at the end of the decade.

And like the ISS, which has become a locus for economic development, Artemis has led to contracts for privately-built robots to explore the Moon in advance of human landings and for rocket companies to deliver supplies there. NASA even decided to help fund SpaceX’s Starship to act as a landing vehicle for the next set of moonwalkers.

The politics of Artemis

The Apollo program was driven largely by the American belief in achieving symbolic technological victories during the Cold War. That impulse has lessened, but hasn’t ceased: A group of US military advisers recently warned in a report on the aerospace industrial base (pdf) that China could outpace the US in a matter of decades. You could read that as companies marketing their wares with politics, but there’s no doubting the seriousness of China’s intent to establish itself as a space power.

Artemis will be an answer to that question, but more as a downpayment on US credibility. The US is attempting to influence new norms for space activity by gathering countries around the Artemis Accords, which would facilitate peaceful scientific exploration and private business in orbit. The US is signing up allies to its plan on the strength of its commitment to going to the Moon. The European Space Agency has played a key role in building the Orion spacecraft, making this a more international mission than Apollo or other past deep space exploration.

Alongside efforts to push for common rules of the road for satellites in Earth’s orbit, and measures like the moratorium on destructive satellite weapons testing, Artemis is a concrete way for the US to outline a vision for humanity in space.

The science of Artemis

While the focus for this mission is on the performance of the vehicles to prepare for future crewed missions, the ability to reach the Moon with four astronauts and significant cargo will create opportunities to learn more about the Moon, the Earth, and the solar system at large.

During the Apollo missions, astronauts landed in brightly lit areas near the Moon’s equator. This time around, the goal is to put astronauts close to the lunar poles, where remote-sensing spacecraft have detected decisive evidence of the presence of water ice. Learning more about this ice and its source will help researchers better understand the history of our neighborhood in space. The ability to extract this ice and use it—to make water, oxygen, and rocket propellant—could make long-duration stays on the Moon feasible, and enable potential missions to Mars.

The biggest difference between Apollo and Artemis is the buzzword “sustainability”—this program’s architects want it to be built to survive political storms and allow for consistent research time spent on the Moon. Ideas about radio telescopes on the far side, geology labs deep in craters, and infrastructure like lunar wifi and GPS could enable space science unlike anything we’ve seen before—outside of science fiction. After the launch of the James Webb Space Telescope, astronomers buzzed not just about what they expected to see but about all the new questions that would be raised by this new tool. The same will be said about a new level of dedication to lunar science.

If, that is, we can get there. That starts Saturday morning, with the shakedown cruise of the latest (and maybe last) US government mega-project in space. The countdown has begun…