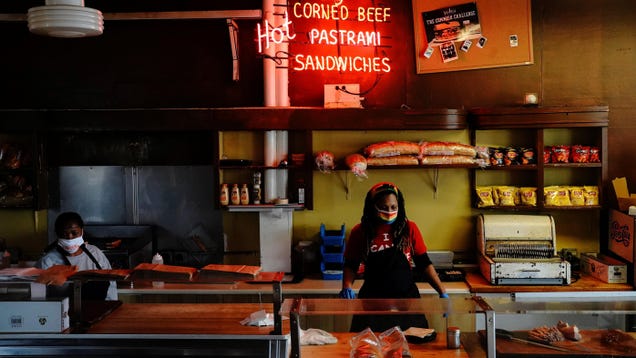 Not only is sexual harassment rampant in the service industry, new research found that workers in these jobs often have a hard time identifying such behavior, suggesting that sexual harassment may be so pervasive that it doesn’t even register as inappropriate.

A study from researchers at Cornell University School of Industrial Relations, which is set to publish in the print edition of Personnel Psychology in January, found that working in an industry with a high prevalence of sexual harassment reduces the likelihood that those workers will identify illegal scenarios as sexual harassment. The industries with the highest rates of sexual harassment are accommodation and food services, information (which includes call center workers and journalists), manufacturing, and retail, in that order.

Furthermore, that could have a lasting effect even when workers transition out of industries with high levels of sexual harassment.“I was really surprised how strong that effect was and the fact that it didn’t seem to dissipate,” said Phoebe Strom, one of the authors of the study and a PhD candidate at Cornell University School of Industrial Relations. “That was the most shocking thing to me because these were most of our first jobs. We work in retail, we work in food service, so what effect does this have across the entire employment landscape in this country?”

To determine which industries have the highest levels of sexual harassment, the researchers obtained all complaints filed with the US Equal Employment Opportunity Commission from 2005 to 2015.

One of the limitations of the study, in addition to its relatively small size, is that the researchers did not collect detailed data on how long people spent in those jobs, which could help answer how much time needs to pass for high tolerance for sexual harassment to be adjusted, which Strom said is something they are currently looking at.

What can be done to help individuals better identify sexual harassment at the workplace?

The researchers said that a company’s human resources department could be more effective by implementing policies that signal low tolerance for harassing behaviors and by allowing employees to have more voice in the workplace, especially marginalized employees. In their study, they found that participants had a higher tendency to name sexual harassment behaviors when they perceived their organization had implemented more rigorous policies against harassment. Some restaurants have implemented changes such as clear visual posters of what to do in the case of harassment and a color-coded system to report bad customer behavior, helping to create a more immediate solution.

Regulatory action could also help, especially, in a low-margins industry like restaurants. Eliminating the sub-minimum wage for restaurant workers, where wages are set below the standard minimum wage, could reduce workers’ need to depend on tips for their income and help mitigate tolerance for sexual harassment from customers.

Overall, the study shows that efforts of combating sexual harassment are handicapped from the start. Strom said the attention is often on big-name companies or on harassment in an individual way, such as teaching people that harassment is not okay, but one issue is that norms around harassment are hard to challenge. “If it’s not being internalized consistently and you’re not seeing that play out in your workplace, in your environment, and you’re seeing this isn’t actually how it is, this isn’t actually what work is, then that’s going to affect your view,” she said.