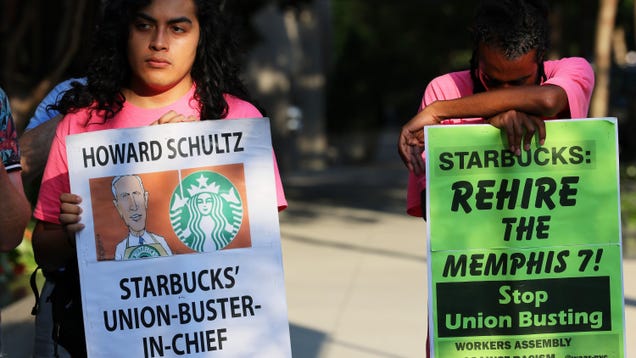 Howard Schultz’s third round as Starbucks CEO soured his legacy

Howard Schultz’s third round as Starbucks CEO soured his legacy

When Howard Schultz returned to Starbucks as interim CEO this spring, he had a reputation as a fairly progressive leader known for introducing worker-friendly policies like covering 100% of workers’ college tuition and extending health-care benefits to part-time employees. But when he steps down next year, his third round leading the world’s largest coffee chain will have been defined largely by his anti-union stance and alleged union-busting tactics.

Starbucks announced yesterday that it’s hired Laxman Narasimhan, who previously headed up health and hygiene manufacturer Reckitt Benckiser, to replace Schultz starting in April, with Schultz staying on Starbucks’ board and serving as an advisor to Narasimhan after the transition is complete.

It’s too soon to say what impact the leadership change might have on Starbucks’ relations with workers, which have deteriorated in the months since baristas in Buffalo, New York kickstarted a successful—if embattled—grassroots organizing campaign that’s spread to stores across the US. More than 220 Starbucks stores have already voted to unionize in less than a year.

In that time, Starbucks has engaged in what the National Labor Relations Board has called “an array of illegal tactics” to combat Starbucks workers’ organizing efforts, such as firing union organizers and shuttering stores in the midst of union drives. And in overseeing these measures, Schultz has permanently altered his legacy.

Schultz has always sought to portray himself as a leader who cares deeply about the people who work for him. Back in 2019, he told CNN about how his decision to offer health-care benefits for Starbucks baristas was sparked by a long-ago conversation with a worker who had AIDS. “My whole life has been trying to make decisions through the lens of humanity and do what’s right, even though if it wasn’t in our economic interest,” Schultz said.

In 2018, appearing on the “Masters of Scale” podcast, Schultz said that in every weekly Starbucks management meeting, he imagined how both customers and baristas (which Starbucks calls “partners”) would react to leadership decisions. “I‘m always asking myself quietly, silently, is this decision going to make the customer and the partner proud? If the answer is even remotely gray, I know we’re on the wrong side of the debate,” Schultz explained.

That consideration does not seem to have come into play when it comes to Starbucks’ response to unionization efforts. The workers’ union, Starbucks Workers United, has accused the company of engaging in hundreds of unfair labor practices in an effort to squelch the movement. That hasn’t stopped Schultz from continuing to frame himself a compassionate leader who’s eager to listen to workers’ concerns—so long as those concerns aren’t communicated through a union, which he’s called a “third party” and “outside force.” “We don’t believe that a third party should lead our people. And so we are in a battle for the hearts and minds of our people,” he said at a New York Times policy forum in June, apparently ignoring the fact that Starbucks Workers United is a collective composed entirely of workers themselves. Asked in the interview whether he could ever see himself “embracing the union,” Schultz simply responded, “No.”

Today, in a climate where Americans’ support for unions is at a 57-year-high, it’s hard to imagine that Schultz will be remembered the way he’s long sought to portray himself. It’s also worth noting that there have always been flaws in the narrative of Schultz, and by extension Starbucks, as a magnanimous employer bestowing benefits out of sheer goodwill.

According to a 2019 Politico report, Starbucks’ much-touted health insurance for part-time employees was not, in fact, introduced by Schultz. He inherited that policy when he took over the company in 1987. Politico explains that Starbucks workers had actually won coverage for themselves the year before—“by joining the United Food and Commercial Workers Union and negotiating a contract.”