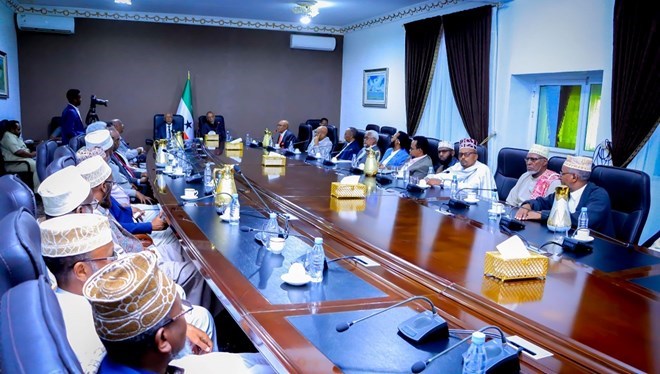 Somaliland has arrested leading politicians while there is an ongoing meeting between the opposition and the government.

Somaliland has arrested leading politicians while there is an ongoing meeting between the opposition and the government.

The news from Somaliland says that today there is a tense situation in the city of Hargeisa, the capital of that administration, where the Somaliland Police forces have started operations.

Reports say that the army has arrested opposition politicians and some of the public who are organizing demonstrations against the government.

The candidate of the opposition party Wadani Abdirahman Mohamed Abdullahi (Cirro) who issued a brief statement spoke about the crisis in Somaliland and pointed out that the arrest of members of the opposition and the public will not prevent their protest which is planned to take place on the 11 in this month of August.

“The unjust and illegal detention of the officials of the opposition parties and their supporters will not change the holding of the peaceful constitutional rally that will take place on Thursday,” said Abd Rahman Irro.

He also sent a message to his supporters, calling on them to prepare for the opposition rally against President Muse Bihi.

“Get ready, a man who says we are not equal, and you deny his supremacy!” added the candidate of the Wadani party in Somaliland.

On the other hand, a critical meeting between the government and the opposition has recently opened at the headquarters of the Ministry of Interior, which will discuss the current crisis.

Reliable sources have told us that the closed-door meeting will discuss the issue of the opposition’s protest and how to find a solution.

Somaliland is facing a political crisis, which was caused by the election of the administration and the opposition and the government disagreed.