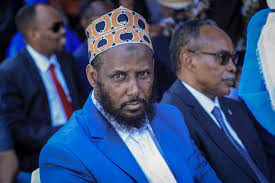 Somalia’s Endowment and Religious Affairs Minister Mukhtar Robow Ali Abu Mansoor revealed that many people opposed him and tried to prevent him from being appointed as a minister.

Abu Mansoor did not reveal the names of those people, but it is known that the people who opposed his appointment were mostly from the Peace and Life group that kept him in prison for more than three and a half years.

Abu Mansoor, speaking at an event in Mogadishu, thanked the senior leaders of the federal government for including him in the cabinet, and said he was grateful.

The minister also asked to forget and forgive what happened in Baydhaba in December 2018, during his arrest.

At that time, 17 civilians were killed in Baydhaba town after they attacked the troops ordered by President Farmajo, to arrest Robow and prevent him from running for the position of the president of South West, which Farmajo wanted and made Laftagareen.

“What happened in Baidha should be forgiven and we should return to peace,” said Abu Mansoor.

On the other hand, Robow called on the federal government to provide good care to the prisoners, saying that the time he was in prison was very oppressive.

Robow was last week appointed as the Minister of Endowments and Religious Affairs, with the government believing that he can help in the ideological war with the Al-Shabaab group.