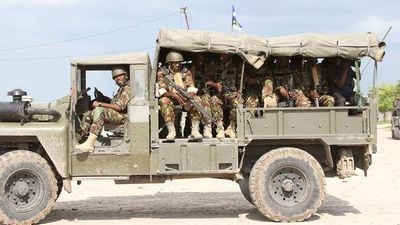 Refunds for KDF in Somalia up 20pc above target.

Refunds for KDF in Somalia up 20pc above target.

Refunds for Kenyan troops fighting Al-Shabaab militants in Somalia exceeded target by 20 percent for the year ended June 2022, pointing to the presence of more soldiers than earlier projected.

Latest Treasury data says grants from the European Union, the US, the UK and other partners rose to Sh3.6 billion against a target of Sh3 billion.

More than half — Sh1.846 billion (or 51.2 percent) of the funds were wired in the first quarter of the financial year, Sh690 million in the third, while the remainder Sh1.067 billion came after the term of the African Union Mission in Somalia (Amisom) ended.

The disbursements for the year ended June 2022 were, however, the lowest in more than six years, having slid sharply compared with Sh8.94 billion in the prior year.

The Treasury funds operations by the Kenya Defence Forces in the war-torn Somalia and gets refunded by the Defence ministry once they get cash from the African Union.

The ATMIS has been mandated to work with Somali National Security Forces towards lasting peace and stability in the Horn of Africa country which has been ravaged by civil war for more than three decades.

Kenya Defence Forces (KDF), in the book titled War for Peace: Kenya’s Military in the African Mission in Somalia, 2011-2020— published May 8, 2020 — suggested that reforming the Somali National Army to take charge of sustainable peace should be the first pillar of the AU mission’s exit plan.

The second pillar is creating a “stable, peaceful and prosperous” Jubbaland, which has had relative peace amid years of civil strife in mainland Somalia by “securing routes in Jubbaland accessible to and used by al-Shabaab”.

Kenya formally sent about 4,660 soldiers to Somalia in October 2011 after incessant attacks and kidnapping of civilians by Al-Shabaab militants within its territory, numbers which have since been gradually trimmed.

A year later, the UN Security Council gave Kenya the green light to join Amisom, a decision that meant the Treasury would not bear the full costs of the incursion.

Earlier estimates showed the international community pays $1,028 (Sh122,332 under prevailing rates) for each soldier per month. Their respective governments then deduct about $200 (Sh23,800) for administrative costs, meaning the soldiers take home about $800 (Sh95,200).

A leaked damming audit report by PwC Associates Ltd (Mauritius) earlier last year queried payment of soldiers who had left the mission, pointing to weak accountability measures in the payroll that resulted in possible loss of millions of dollars between 2016 and 2018.

Soldiers usually serve for one year which may be extended by a few months or cut short depending on the situation and the financial operations.

Under the Amisom, the EU funds largely catered for allowances for the about 20,000 Amisom troops and police, international and local civilian staff salaries and operational costs of their offices.