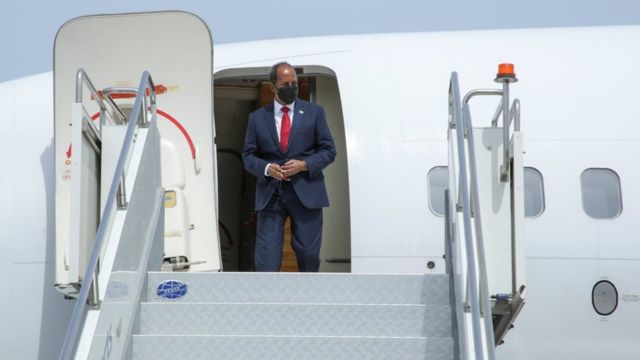 The president of Somalia, Mr. Hassan Sheikh Mohamud, left for Uganda today, and the president and his delegation were seen off at Aden Adde airport by central government officials.

The official visit of the president came at the invitation of his counterpart, Yoweri Museveni, and will last for three days.

Villa Somalia, which reported on the president’s trip, announced that Somalia and Uganda will discuss strengthening relations between the two countries and security cooperation.

“President Hassan Sheikh Mohamud, who is starting a three-day visit to the country, will discuss with President Yoweri Museveni the strengthening and development of relations between the two governments and the enhancement of cooperation in the field of security,” said the written news from Villa. Somalia.”

Also, the president, while in Kampala, the capital of Uganda, will participate in the economic forum of Somalia and Uganda, which will be opened in the country, while the businessmen and economic experts of the two countries will analyze the cooperation in trade, investment and also the growth of production. production.

President Hassan Sheikh Mohamud will also receive the Somali community and students studying in the country, especially in Kampala.

Uganda has become the 8th country visited by President Hassan Sheikh since he was elected on May 15 after UAE, Turkey, Eritrea, Kenya, Djibouti, Tanzania and Egypt.

All of these countries are important to Somalia, including neighboring countries such as Kenya, those that have military presence in Somalia and those that have historical trade or diplomatic relations with Somalia, and Uganda plays a part in that importance.