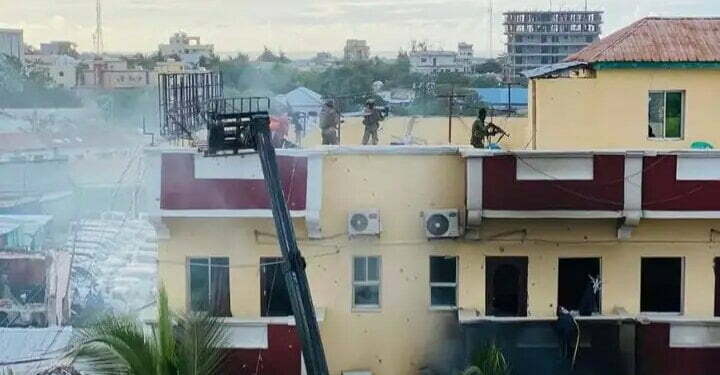 Al-Shabaab militants are still fighting in the Hayat hotel in Mogadishu for more than six hours, and there are many casualties and injuries.

Al-Shabaab attacked the hotel, which is located around KM4, with car bombs at around 7:00 p.m.

The information about the first losses is now coming out, and it has been confirmed that at least 10 people have died, and the number of injured is much higher.

The names of those who died in the hotel include businessman Abdirahman Hassan Iman, Yusuf Mahad Barrow, Ibrahim Raage, Abdihadi Mohamed Sheikh Adam, Hassan Mahmoud Farah, and others.

Among the people who were injured in the security commander of Banadir region, Mukhiyaddin Warbac Shadoor, who was one of the soldiers who came to the rescue of the hotel.

Inside the hotel, there is a fight between the government forces and the Al-Shabaab militia whose official numbers are not known. Al-Shabaab is said to be on the upper part of the hotel.

Also, other government forces outside the hotel are hitting the hotel with heavy weapons, while it is difficult to remove the Al-Shabaab group.

Al-Shabaab said in a statement that it killed more than 20 people in the hotel, but this group’s claim cannot be independently verified.

The security agencies of the Somali government have not released any information about the attack.

It is the first time that Al-Shabaab entered a hotel in Mogadishu since President Hassan Sheikh was re-elected on May 15, 2022.

Hassan Sheikh has made it his first priority to defeat the Al-Shabaab group, but the government has not yet taken any action against this group, nor has it presented its war plan.