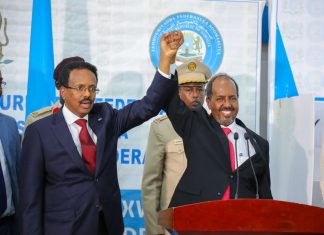 Following the election of Hassan Sheikh Mohamud as the new President of Somalia tonight, heavy gunfire erupted in Mogadishu in celebration of the occasion.

The situation in the city is tense the airwaves are heavily covered with bullets, and a new atmosphere has entered the city.

Public sentiment is high, there is a lot of excitement and people are congratulating each other on the victory tonight, and government forces are keeping the security vigilant.